Burn Ban is Back

Parmer County Commissioners Court met in regular session on Monday, January 23, 2023 at 10:00 a.m. in the County Courtroom of the Parmer County Courthouse in Farwell, Texas. The meeting began with prayer and the Pledge of Allegiance to the American Flag and Texas Flag.

There were no comments from the public during the open forum. Minutes from the January 6th meeting were read and approved. Commissioners approved the payment of the accounts payables as presented by County Treasurer Sharon May. The Treasurer's Payroll Report was also approved.

DPS trooper Kyle Grimsley asked the Court to consider ARPA funds for the purchase of night vision equipment. Commissioners approved the $10,000 expenditure and the new equipment will remain the property of Parmer County and will be maintained by the Sheriff's Office.

Commissioners discussed the possibility of removing taxation on personal vehicles. Parmer County Chief Appraiser Jill Timms was present to answer questions. The item was tabled until all the affected taxing entities could be notified and allowed to respond.

The Treasurer's Quarterly Report was approved and can be found on page 8.

In other business, continuing education hours for the Tax Assessor-Collector and JP Pct. 1 were approved, a $490 funding request to make the county website compliance with existing disability law was approved, and 2022 rollover vacation hours for 3 employees was approved. Also, the yearly collection report from Perdue, Brandon, Fielder, Collins & Mott, LLC was approved.

Parmer County Sheriff Eric Geske informed the Court that the Parmer County Law Enforcement Center is currently housing 37 inmates of which 15 are paying customers from Deaf Smith County and 2 are paying customers from Dawson County. Commissioners approved a request from Sheriff Geske for $49,677.59 of ARPA funds to equip the SO's 2022 Ford pickup and 2023 Chevy Tahoe for service.

The next regular meeting was rescheduled for Friday, February 17th.

All meetings are open to the public. Information in this article is only a summary. 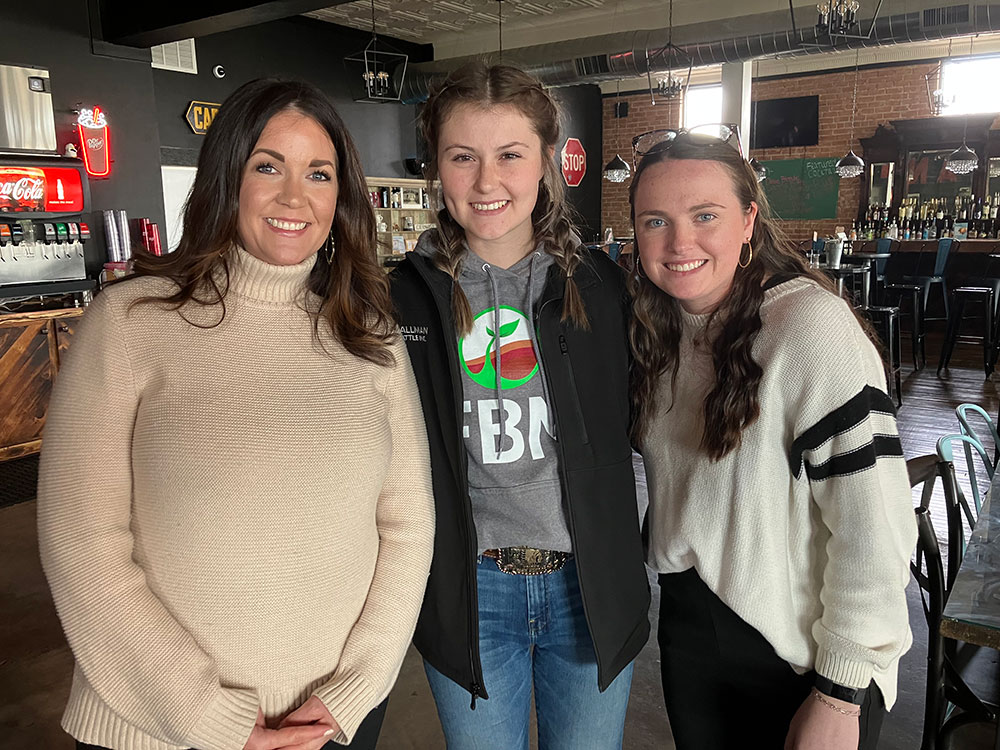 Marla Hart was the guest speaker at the Friona Noon Lions Club meeting last Monday at The Farmwife Kitchen. Marla is the owner/operator of the Friona and Muleshoe H&R Block businesses which specialize in tax preparation, bookkeeping, payroll, and business formation. Also present at the meeting was current Club Sweetheart Emma Schueler and Past Club Sweetheart Emma Rector.

I am pleased to start Mayor's Minutes back up after a little bit of a hiatus, and keep our community informed about what is going on down at City Hall. We are starting 2023 with a variety of projects on the table to improve the city. Our first project to start the year will be the opening of a cardboard recycling center on February 1st. The city, through a grant from the Panhandle Regional Planning Commission, will accept cardboard at the city barn located at 8th and Jackson Avenue, where we will bail the cardboard to be picked up for recycling. This will help reduce the solid waste in Republic's dumpsters and continue the Keep Friona Clean campaign started a few years ago.

The City of Friona has also been deeded the building and land of the Louisa Wilson Girl Scout Hut on Ashland. The city intends to use this site, along with the Redeemer Center, to attract a day care operation to the city, with help in funding from the Amarillo Area Foundation and the Panhandle Regional Planning Commission.

Our next major project involves the renovation and expansion of the Friona Fire Department. The city is looking to expand upon the existing building on Main Street and provide a building that will house all the department's vehicles, along with providing a training facility for our volunteer department and the surrounding areas. The work on this long term project is just beginning, and there will be more to come on this in later additions of Mayor's Minutes. I would like to thank the fire department for working over the past several months to develop a plan in an ever-changing environment. Fire Chief Gary Stowers and Assistant Chief Danny Campbell are leading a committee of fireman and council members to develop a model for the renovations and directing the effort to accomplish a goal set by the council and former Mayor Rick White many years ago.

In other projects, the City is working with the Friona ISD to acquire a School Resource Officer through funding provided by the Panhandle Regional Planning Commission. Also, the city and the Economic Development Commission are finalizing a development contract to build houses on the former Jones property to the west of Prairie Acres, between 15th and 16th Street. This project will be done in phases and provide multi-bedroom homes to Friona, with the first phase completing in the early Fall of 2023. A project is also in the design phases of renovating the city pound and to develop the former Women's Federation Building into a center for women's activities and services.

Our EMS service is staffed sufficiently now that we can confidently handle most calls and transfers from Parmer Medical Center. Along with the ambulance provided by the community, Friona is much more prepared to handle any medical emergency than in the past. Thank you to the city council and to Nick Baucom, our EMS director, for leading the charge to work through staffing and funding issues over the past budget cycle.

There are a few new faces at City Hall this month that I wanted to take the opportunity to introduce. First is Emma Rector, a Friona native that has come back to serve as our Friona Chamber of Commerce and Friona Economic Development Commission's Executive Director. Emma has already taken the reigns from former director Chris Alexander, and you can expect many great things to come. Also, Danny Campbell has joined City Hall as Friona's Fire Marshall and Code Compliance Officer. Mr. Campbell will be reviewing the building code and will begin enforcement duties soon. It has been many years since Friona has had a resident Fire Marshall, and I want to welcome him to his new position. He will still be serving as Assistant Chief for the Friona Fire Department. Finally, I would like to welcome Lupe Salinas as our new Animal Control Officer. As many of you know, Lupe has long since been an advocate for animals in and around Friona. Now, she will have the enforcement authority to uphold local regulations as it relates to animal welfare.

I would also like to announce that I will begin a monthly rotation of town hall discussions at various clubs throughout the next year, including the Senior Citizen's Center. Look for me to be at the Senior Citizens' lunch on the third Thursday of every month, and we can talk about the goings on of Friona! 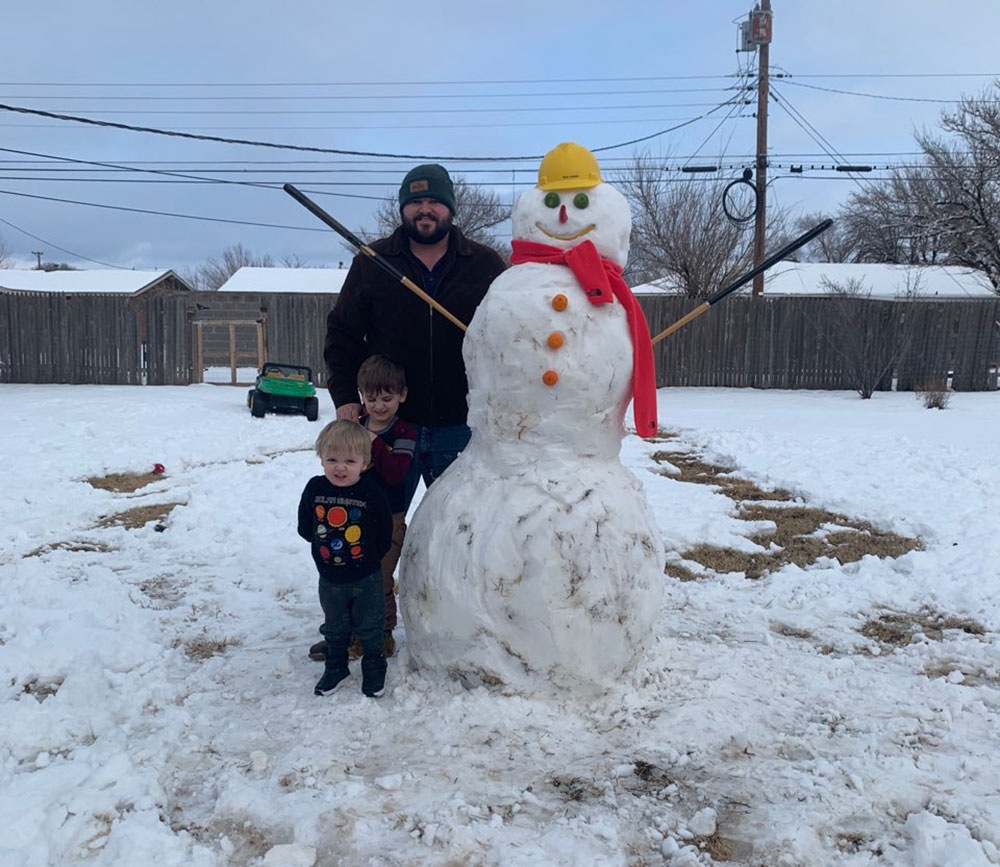 Kyle Lambert, a manager at Cargill, and his sons built a snowman on Tuesday after a winter storm dropped 5.5 inches of snow on Friona. Kyle also serves as a board member for the Chamber of Commerce. Kyle "Frosty" Lambert featured lime green eyes, a chili pepper nose, and a hard hat for safety.

Send In Your Photos - Our special Valentine's issue is coming up on February 9th. Email your Valentine's photo(s) to frionastar@wtrt.net or text them to 806-265-5200. Please supply names and relationships and contact info if we have any questions.

It's Your Money - A new feature this week is Texas Senate News. Richard Lee has been covering the Texas Senate for the past 20 years. Since the Texas legislature only works every other year it is important to know what they are doing with our tax dollars. They have a record $33B dollar surplus this year and there is a push to lower property tax rates and increase spending on education. We will keep you informed.

Stock Show Edition Next Week - The Friona Star will publish a Parmer County Jr. Livestock Show special edition next week which will include complete show results and lots of photos.

Food for Thought - St. Ann's Catholic Church of Bovina is having their annual German Sausage Dinner on Sunday, January 29, 2023 from 11:30 a.m. until 2:00 p.m. (Texas time) in the St. Ann's Parish Hall at 401 3rd Street in Bovina, Texas. A delicious buffet of Sausage and Sauerkraut with all the trimmings will be served. Donations will be $15 for adults and $6 for children under six years of age. Take-out plates will be available at no additional charge.

Blood Shortage - Coffee Memorial Blood Center has announce an Emergency Blood Shortage. After a difficult month of collections in December and January, the inventory is now down to less than a 1.5-day supply. Call 877-340-8777 or visit obi.org to make an appointment. If you are going to be in Amarillo, Coffee Memorial is located at 7500 Wallace Blvd #2149. The next Friona Community Blood Drive will be in March.